(for bio's and music scroll down please) This Berlin based band is the new artistic product of double bass player and composer Meinrad Kneer. His compositions are played by a fine group of jazz musicians and improvisers.
Most of the repertoire has been written exclusively for this combination of players and some pieces have been adapted and rearranged for them.
Kneer's music, influenced by numerous musical styles as jazz, improv, ethnic music, new music and rock, feeds these experienced players to discover new grounds of unexpected interplay and powerful improvisations. 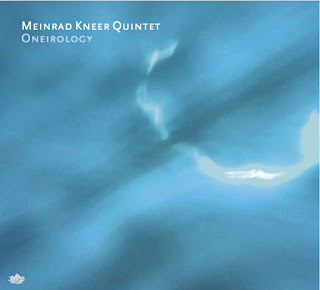 Sebastian Piskorz was born in Halle in 1982. Through his mother being a church organist he grew up with music and first attended piano tuition from the age of 7.

He studied trumpet at the academies of Berlin and Oslo and composition in Dresden.
Apart from the Meinrad Kneer Quintet, Sebastian plays trumpet, piccolo trumpet, flugelhorn and french horn in various bands and ensembles, such as Keimzeit, Pin Addix, Miramode Orchestra and Composers Orchestra Berlin.

A prolific saxophonist and composer, Peter Van Huffel has been referred to as “one of the most intense performers on [his] instrument” by Raul d'Gama of All about Jazz. He has played an active role in many of the world’s top jazz scenes, has led multiple tours around North America and Europe. He is the leader of the energy-packed punk-jazz trio GORILLA MASK, which released it's debut CD, "HOWL!", in November 2012 (Between the Lines Records) to rave reviews across Europe, North America and Japan. GORILLA MASK's second CD, “Bite My Blues” - a live recording from their 2013 tour across Canada - will appear in May 2014 on the world-renowned Portuguese label “Clean Feed Records”. Peter also co-leads the Berlin ensemble House of Mirrors with Belgian vocalist Sophie Tassignon, pianist Julie Sassoon and bassist Meinrad Kneer, which can be heard on their 2014 release "Act One"; and the New York trio BOOM CRANE with bassist Michael Bates and drummer Jeff Davis, which will release it's debut CD in 2014 on “Fresh Sound Records”. Peter also performs in the Scott Fields Freetet, the Andy Schofield Quartet, and with American guitarist Dan Nettles, among many others. Peter's previous releases include the critically acclaimed “Like the Rusted Key” (Fresh Sound Records, 2010); "HuffLiGNoN" (Clean Feed, 2008), an earlier collaboration with Tassignon, featuring trombonist Samuel Blaser and Michael Bates; “Silvester Battlefield” (Fresh Sound, 2007) and “On Common Ground” (Independent, 2005) from Peter's original New York Quintet; and the 2006 release by the New York trio ANIMAL FORUM. www.petervanhuffel.com 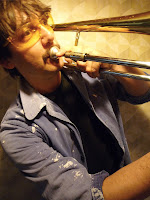 Gerhard Gschlößl is a new innovative trombonist of the european contemporary jazz, avant-garde and improvised music scenes. He grew up in southern germany where he studied trombone and composition. Living in Berlin since  2004 he toured with many groups like "Vierergruppe Gschlößl" and "Der Moment". Collaborations with musicians like Albert Mangelsdorff, Sam Rivers, Michael Mantler, Perry Robinson, Billy Hart, Rudi Mahall, Danilo Gallo a.m.o.. He brought out several distinguished recordings, founded the musicians collective „Jazz Kollektiv Berlin“ and the famous nonet "G9-Gipfel, Berlin“

Double bass player, composer, label co-owner and festival organizer Meinrad Kneer (photo ©Lisa Haskins) operates on the borders of jazz, improvised, ethnic and contemporary music. He studied music in Amsterdam/ the Netherlands, where he lived between 1995 and 2010. Since 2011 he is a resident of Berlin/ Germany.


Currently he is involved as a leader in groups such as the Meinrad Kneer Quintet and the trio Baars/ Kneer/ Elgart, as a co-leader in the piano trio Veenendaal/ Kneer/ Sun (“...one of Holland’s most interesting contemporary jazz groups” - Ken Vos, draaiomjeoren.nl), the quartet Klare/ Platz/ Kneer/ Elgart and Willers/ Kneer/ Marien and Spoon 3.  He has performed with among many others, Najma Akhtar, Han Bennink, Bill Elgart, Fred Frith, Touria Hadraoui, Tristan Honsinger, Paul Lovens, Roscoe Mitchell and Jon Rose and recorded almost 30 CD’s so far. In the past years he has been touring most countries in Western and Eastern Europe, the Middle East, Turkey, Morocco, Norway and Mexico. Since 2001 his work as a composer has been supported by the ’Performing Arts Fund’. In late 2006 he co-founded together with pianist Albert van Veenendaal the independent label Evil Rabbit Records. From 2013 on he co-organizes together with Sara Ercoli ’Pentagramma Italiano’, a new festival for contemporary music and theatre in Berlin.  www.meinradkneer.eu


Andreas Pichler (photo ©Oliver Jiszda) is born on the 10th of May 1981 in Tyrol, Austria. He grew up in a little village on the mountain. At an early age, Andreas first picked up the trumpet to play Tyrolian folk music with his twin brother Matthias. 1991 he moved with his family to the city of Innsbruck. Andreas studied classical percussion and jazz at the lokal conservatory in Innsbruck. In the year 2000 he decided to live and study in Amsterdam. He graduated at the Conservatorium van Amsterdam in June 2007. Since 2009 he is living in Berlin.